How to play a Sorcerer in Tera Online

Sorcerer in Tera Online is a very powerful and fun class when someone plays it using the right skills and glyphs but at the same time if someone has no idea how to play a sorcerer they can be the worst player ever. Specifically some sorcerers in Tera have taken the worst rotation ever and made it the most used using fireball over and over. This is very bad this makes you a horrible noob. Look below if you want an example of how to tell that you are bad.

So you might ask "How do I not be one of these sorcerers?" continue reading to find out more.

The first thing you need to decide is whether you will be a PvE player or a PvP player since the glyph build will vary as well as the proper crystals and rotation. These builds will also require glyphs from Temple of Temerity and Sir Juka's Gallery. You can also just pvp to get glyph boxes for both if you don't wanna run these over and over since without a group it can be hard to find people to run these.

Lets talk about PvE first you will need to use the following crystals to maximize DPS against bosses:

You will want to make sure you stay behind the boss as much as possible this means you will want to use your glacial retreat, mana siphon, and backstep to position yourself to always be behind the boss. If this is too difficult for you then consider swaping out the behind critical damage for boss damage but you won't be doing as much DPS. When it comes to glyphs that you will need you want to use the following: http://teracodex.com/glyphbuilder#so60:v1:017910112012252210102

The rotation for this build will depend much on your ping so if you have bad ping you will adjust your rotation depending on how good or bad the ping you play with is because of the buffs that you will be running though.

This is the rotation that you will want to use if you have ping high enough to accomplish this without buffs running out. The skills are:
OC = Over Channel
LTC = Lightning Trap Cancel (Means start casting it and move before you blow the cooldown)
BoC = Burst of Celerity
FB = Fireblast
HS = Hailstorm
FlamingB = Flaming Barriage
MB = Magna Bomb
AP = Arcane Pulse
IN = Ice Needle
PB = Painblast

You can adjust this as you feel the need too since depending on your play style and ping it might / might not be possible for you to accomplish this but with the glyph build above this will be optimal damage for PvE.

When it comes to PvP you will want to change the crystal setup since boss damage doesn't work on players.


The build I will be showing is more of a glass cannon glyph setup not recomended for 3v3's or 1v1 but it will be very good in a pvp situation when you want to destroy groups of people. The slaying crystal is really good if your able to stay alive long with your hp at 50% of course you can substitute it for back power instead and the salivating is good for the mana since you don't want to run out.

The slick arcane pulse allows you the ability to move with an arcane pulse charged which if you actually hit targets with it you will do some serious damage much less noticable compared to putting a fireblast under peoples feet. You want to get used to using your traps since they are very useful against people whether it be explosive to knock people over or stun.

Rather then modifying one of the older topics on crafting I figured it was a worthy cause to just make a new post about crafting. Keep in mind they changed crafting so drastically that it's nothing like it used to be. For one thing before crafting was pretty much useless and worthless and you needed to cap out crafting on each profession of leatherworking, tailoring, armorsmithing, focus crafting and weaponsmithing.

The new crafting system has the following:

This new system includes some changes to how crafting works and also how much can be crafted. Let me explain when the new crafting system came out they changed how many times you can either gather or craft by the cost of labor points. These labor points restore on a daily basis but once they are used you will need to wait for them to restore or buy more either from crafter's loot box for an RNG chance or at a npc which patrols velika. This works on an account bound basis in other words all of the points from you main character share the same points as all the ones in that same account. Different accounts have different point pools from your main. 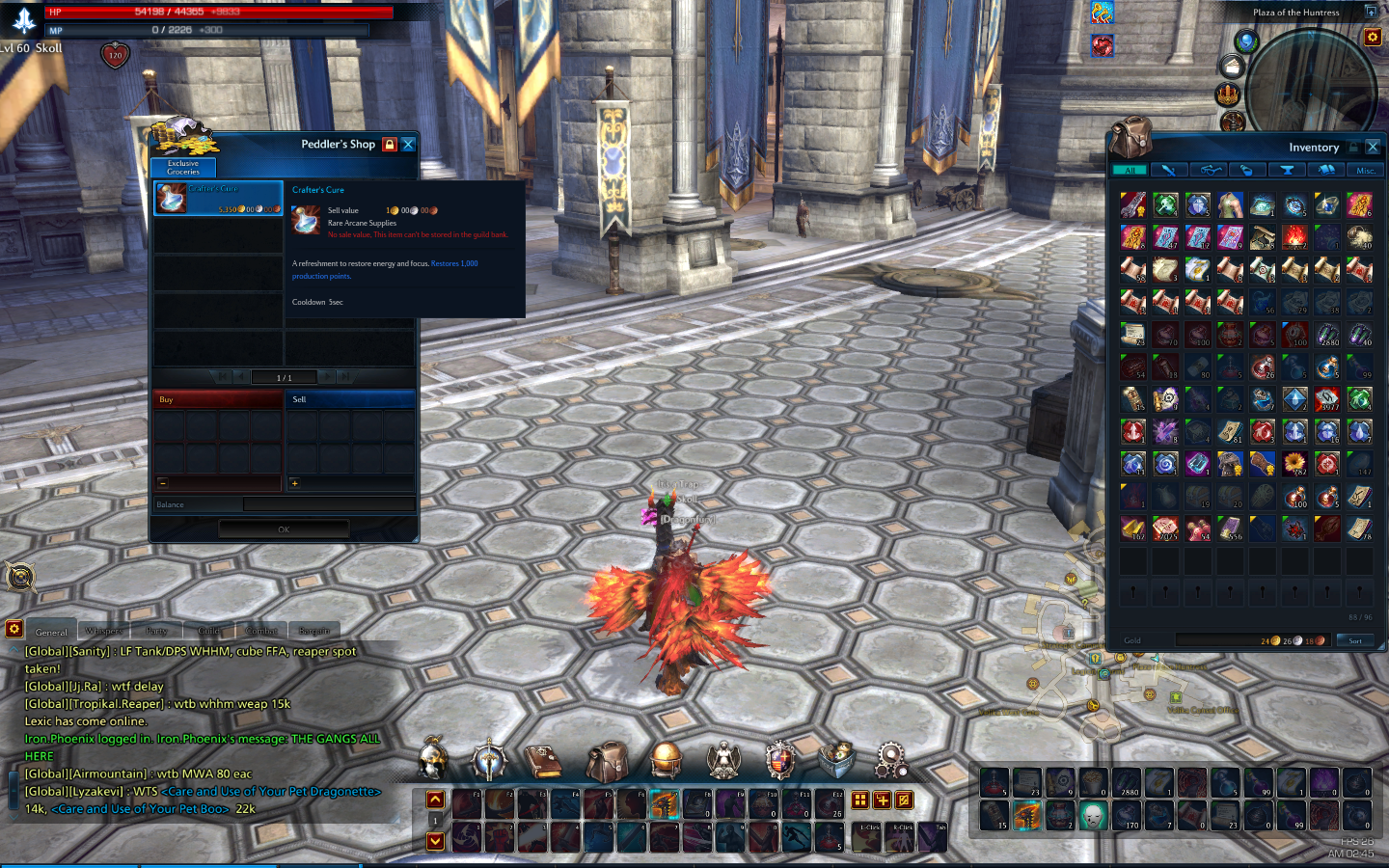 This is quite expensive 5,320 gold each to restore 1,000 labor points. You gain 5 points back every 5 minutes. Gathering from nodes cost 10 points regardless of whether you succeed to gather fail or get hit and stopped during a gather by a monster or player. The cost for crafting weapons and armor are much more expensive 25 points to 150 points per item.

Some new items also appeared with the change of crafting such as the new crafting Artisan Additives these are used to increase critical success rate to get bonus items during a craft. These items are a one time use and usually cost about 800g on the trade broker they are only obtainable though the cash shop. They are supposed to only increase chance by 15% but this seems to be much higher when crafting a weapon or armor is usually a 1 and 10 for a critical on average for someone who's unlucky having the items usually make it more like 1  in 4 which would suggest the success rate is much higher of course RNG never works how we want it. 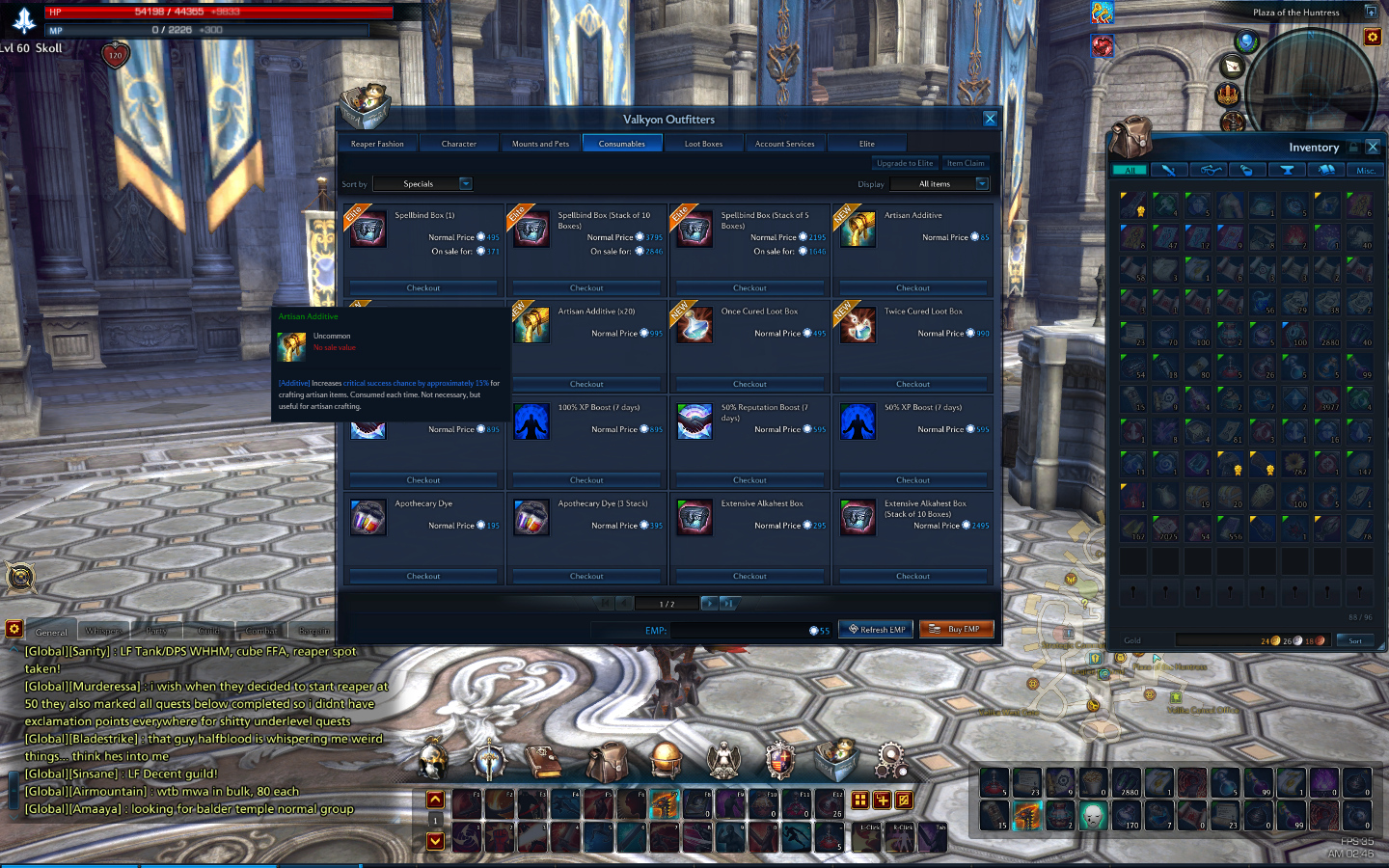 The crafting quests to make crafting to 410 easier have been removed so now you will need to use old materials and craft items to actually be able to get to 410. And crafting above 410 will require new recipes the old ones will no longer bring you higher anymore. You can buy these from the npc's in the crafting area's of main cities. After you hit 500 crafting you need to complete a crafting quest to go higher and be an artisan at that craft. To do that you are required to meet the following requirements:


So how this works is you are required to at least hit 150 promotion points this means you don't have to max all of them to get this completed you only need 150 out of 175 possible. Once you hit the max amount of points it takes away the window and you are granted artisan crafting allowing you to craft higher to 800 points. There is an item to drop the artisan mastery which you can buy which suggests you might have to do this in the future in order to craft some of the materials since you can only have one mastery at a time for artisan.

Crafting for visionmaker 3 will also require the crafting oil which is obtained from artisan crafting. This new system has kind of forced people to feel the need to make many new accounts just for gathering and crafting since they don't share the same labor points. Also causing people to bot on low levels in higher level area's at a much worse rate then before.

The only useful items which can be crafted is the flawless set which is a crafted version of steadfast but aside from that until tier 15 comes out we have the only real incentive to crafting being alchemy potions and scrolls and etching for gear.


Posted by TrueNoir at 1:49 PM No comments: Links to this post

So this of course like always when Tera Online decides to do something they never do it right and if you've had the problem before you'll find out that redownloading the whole game to fix this bug isn't working and its failing to download patches as well cause you know how Tera is. After running though everything that was in all of the online posts and realizing nothing worked one of my guild members sent me a fix for this problem. This might not fix future problems when they go and make new updates but it will get you playing right now if you can't play cause of this error.

To make it really simple I made a quick little installer to add the files so if you aren't a computer pro all you need to do is double click and install.