Figured I would just go ahead and use this topic for the pay to win items as they get added Tera Online is 2 years old that's about the incubation time for a free game to go pay to win. And seeing how they started adding items which cannot normally be obtained without purchasing from players this will only get worse from this point on.

Artisan Additive: Can't be obtained from anything else currently but shop items
Once Cured Loot Box: Contains a 4k restore item for the new crafting point system vendor in game sells 1k restore for 6k gold but the full restore is RNG loot box only.
Inner Wear Boxes: Can be obtained from a box in game but you get 1 out of 20 different types while the RNG loot boxes have a "chance" for one of certain types depending on what you want. While this might not be pay to win to everyone it costs 80 tokens to get 1 chance for 20 different inner wears its pay for an advantage over the free players.

The new crafting system by itself puts the game at a much more pay to win perspective since you are limited on farming and crafting and that they increased the cost of how much everything from the first day the patch came in they doubled how much it costs to gather and craft. That was done as a ninja patch without any comment about it.

Normally when En-Masse would do some kind of update such as the ninja update we knew something new was going to be added to the shop but they ninja added artisan additive and didn't make any official comments so people kept asking support and getting responses like we don't understand how everything works but yet they secretly add some pay to win items into the shop like they are embarrassed about it. Even the one cure all loot box wasn't advertised right away we magically see these items in the shop and then later they decide to make a blog post which is different from before where they would first blog about it and it would be released. But mmorpgs that are free to play eventually they get doomed to go pay to win. So as they start ruining Tera I'll keep posting updates to this topic here.

Posted by Unknown at 12:08 AM 2 comments: Links to this post

Status of Tera Online after the Reaper Patch

So I'm sure people who might have quit might be wondering what Tera Online is like now that reaper is out. I must say reaper is a really well thought out class. The combo system on reaper is really smooth and they actually gave you really good chain skills unlike other classes that you have to guess what the best combo would be. Of course it is likely the new space bar to win class more so then slayer is.

Some of the problems I'm seeing with it is most reapers have no idea how to play as a reaper in pvp they are bad which is giving reapers a bad name you'll see stuff like WHHM (no reapers) or reapers making them with the level 58 quest gear hoping to get carried by hosting a run cause they are too lazy to run Balder's Temple for gear. So I would say you need to do the following if you come back to try reaper:

So Balder's Temple gives the Oculus gear which is steadfast equivlent non enchantable gear this can be good for people who lack steadfast for mains as well but for reapers it's a must to get into wonderholme. Of course getting in to wonderholme will be easier if your running with a guild just like my guild has been working on helping each other gear reapers cause trying to pug to do the same thing means people keep coming in and getting your stuff. You can craft the flawless bloodhoned gear which is slightly lower on base attack then wonderholme if you don't really care about running wonderholme but reapers have no pvp set of gear.

To be completely honest Reaper was the only real highlight of this patch. They removed the remodel system and as of yet there is no good replacement on North American servers to make up for removing it unless you want to cash shop some new clothing. The crafting and gathering system now costs points and to make it worse a day after it came out they doubled the cost for points to force people to farm even more. Claiming that it was going to stop the botting problem which will only end up getting worse since now you'll have people making up 30 or 40 new accounts to get points to gather with. Like heres a really good example of it: 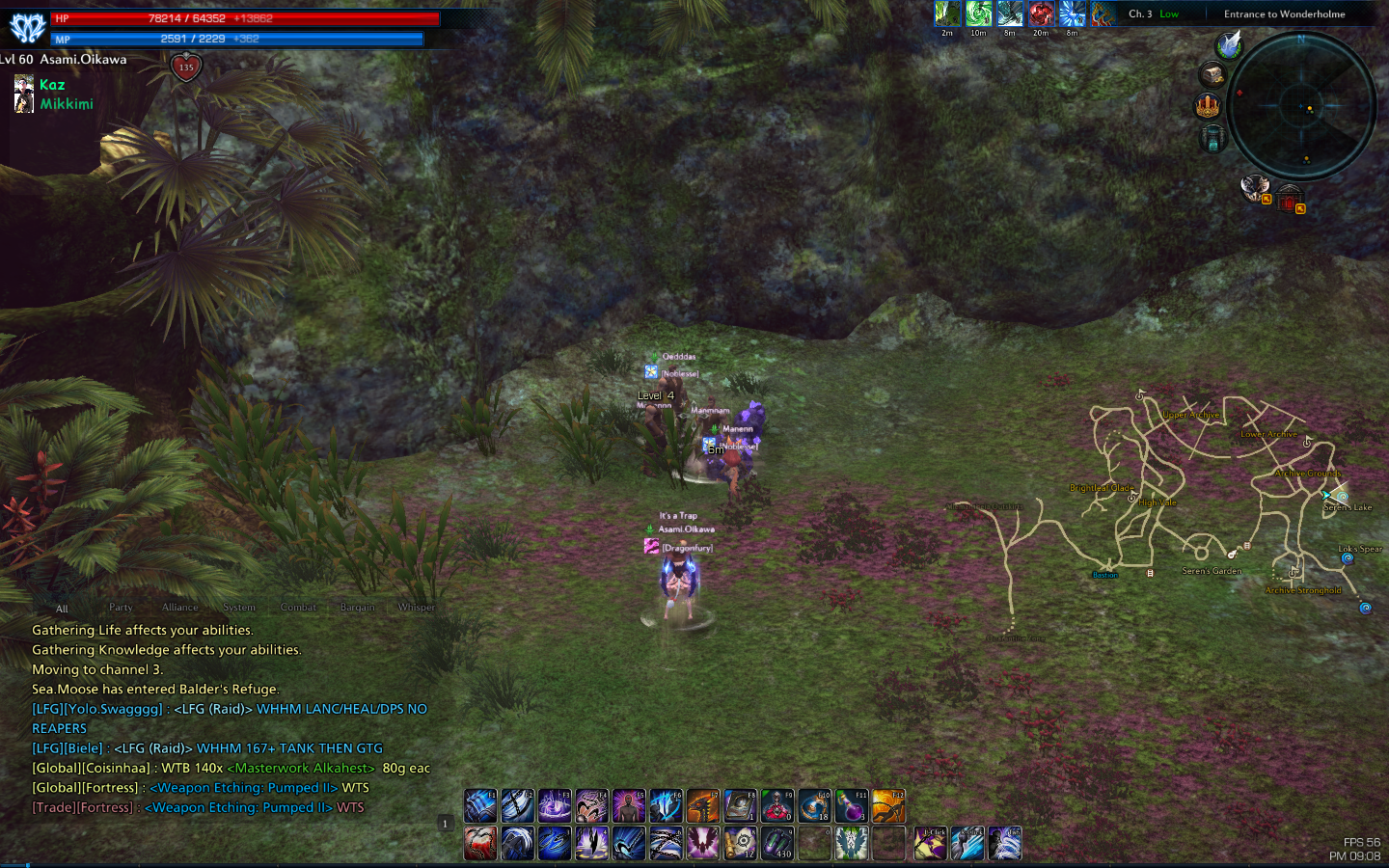 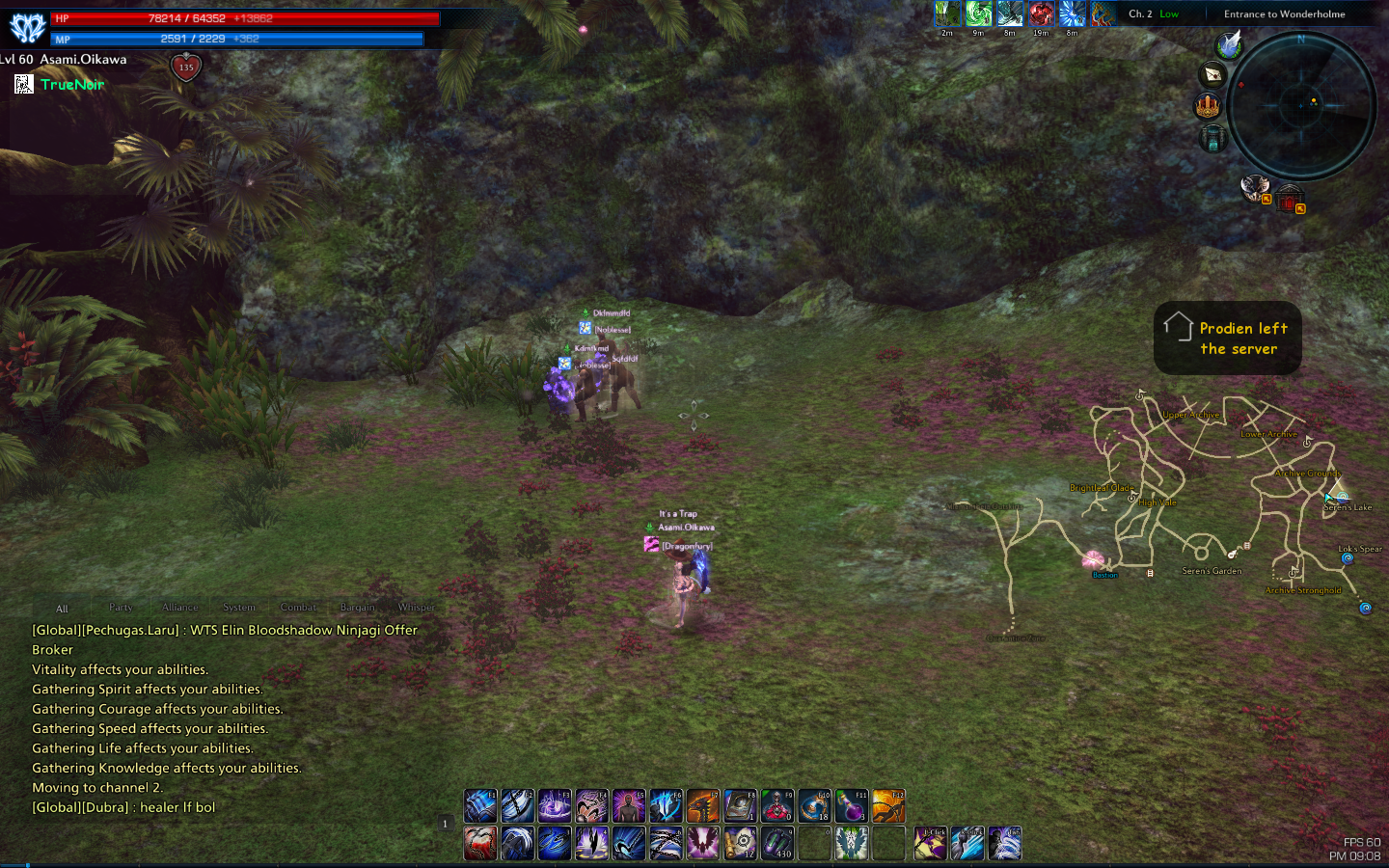 Could care less if the guild Noblesse is upset by me posting screenshots of some of there bot lines in both channels of bastion they have one level 60 with three level 4's gathering from the same node at the same time they are all following one level 60 back and forth and because the node spawns are so fast they just have to run back and forth doing it until they all use all of the points up then they switch out and do it on fresh accounts. I'm pretty sure eventually someone will think to make a clientless bot which does the same thing and gathers like this if it's not already possible.

Its great they provided points which restore over time and all and a npc which sells potions to restore for in game gold the problem is that it costs almost 6k for 1k point restore which is quite expensive and honestly you most likely won't get that much for using 1k points with people botting so hardcore since most items are still slightly worthless.

The thing thats the most frustrating thing is the fact they added Artisan Additive which increases the critical rate success on crafting. If you have yet to get to higher levels of crafting when you go to craft the bloodhoned set it crafts three of these weapons for one set of materials you cannot get Artisan Additive in game its emp only so you'd have to spend money on it or buy it from someone who has to increase chances. Sure you don't need it cause you can still critical but after doing a lot of crafting the actual success rate of most weapon's is really low we are talking like 100 to 1 success rate. Sure its not a 100% success change but it is a pay for advantage. Its only a matter of time that they start offering more greed options when they see people spending a lot of EMP on this new money sink. Speaking of which making gold for non EMP spenders is continuing to be really grindy with no new ways to really make money aside from crafting with tons of bot mules pretty much.

It does scare me about Tera Online's future cause usually most free to play games stay non-pay to win for two years before they start rolling out the red carpet reason being is they try to build a player base and get a lot of people sucked into it so that as they provide pay to win advantages when they lose 10% of the player base it doesn't matter and most people keep playing cause they "Invested" into Tera Online with so much money. And they keep trying to justify the fact they are adding these features by saying En-masse has no control over what Bluehole does to Tera Online. But let me enlighten you guys to a fact:


Need proof cause you don't believe it you can click here and view it from Bluehole's history which basicly means that when we are dealing with En Masse Entertainment we are dealing with the North American office for Bluehole meaning it is owned by Bluehole. I always found it odd that they had source access to the server and never used it. A perfect example is Japan they make tons of cosmetics which only they have access too and only sometimes do things made for japan come here this is because Bluehole's artists aren't making those things we are only getting access to what Bluehole itself makes. This is why they always claim to be able to forward everything to the developers of Bluehole because En-masse is the same company.

But anyhow for now I'm still playing with my guild even though things don't really look good for Tera Online's future especially since many of the bugs which have been complained about still exist with the broken game engine like all these collision based exploits with dungeons and battlegrounds. But I will be giving Archeage a try when it comes out since it has some pretty interesting features to it just incase they decide to hardcore ruin Tera Online in the future.

Posted by TrueNoir at 8:44 PM No comments: Links to this post