So during one of the newest updates to K-Tera we see something major coming to Tera Online. This is the removal of the remodeling system. Basically the remodeling system allowed you to take any tier of gear and use it in place of what ever your current gear was. So for example a level 60 using tier 10 weapons to remodel his or her level 60 weapon. This was one of the really nice features about Tera Online it allowed someone to make their character unique without needing to buy a costume to do so.

My guess is they are doing this to force people into buying costumes from the shops. With the lack of ways to customize yourself people would feel the need to buy more costumes. So Tera Online truly might just be another wow clone where everyone has the same style of armor just recolored. If you have yet to see the actual notes this was it:

So what this means is you won't be able to sell older gear either for style of the templates anymore either.  This will most likely effect more then just what people enjoyed. And also because of this kind of makes having a list of armors and weapon templates obsolete. I kind of feel like they are making a bad choose doing this especially not providing a way to continue still using older templates like in the costume model or something. This was one of the main unique features that makes you stand out from everyone else and they are taking it away so that everyone will be like a clone of the person next to them.
Posted by TrueNoir at 8:30 PM 12 comments: Links to this post

Exploiting Break Out in Tera Online!

And the whole reason I'm going to explain some of the ways they are exploiting is so that everyone can abuse these bugs and hopefully En-Masse will get enough complaints and they will be more likely to fix them since that seems to be the only way to get stuff fixed now a days.

So lets first talk about the block cancel exploiting that's going on. The sad thing is at first it was purely something people abused in 3v3 arena's which I don't really find fun anyways so it wasn't really something that I found annoying but now people have been abusing this in fraywind and corsair's which are the only fun battlegrounds. And most people might not realize what people mean by macroing so let me explain. Warrior class and Lancer class has the ability to cancel skills using a shield block. And people who have a keyboard with the ability to macro key functions can macro stuns and slows with block cancel which allows them to avoid cool downs and refresh the stun over and over until you die stunned. That might not sound broken at first but when your in a corsair's and get stunned for one minute until you die by one warrior and can't do anything at all while they kill you that is pretty frustrating. At first the block cancel was mostly only used for stopping the combo attack mid animation to stagger but our pro exploiters found that if the macro was set to millisecond's they could even abuse skills the same way as the combo stagger exploiting. And if you still don't understand what block canceling is this video explains it pretty well.

Another issue with people using block canceling is that it speeds up the animation of attack this will also cause you to lag and lose FPS making it so that you cannot move at all while they are on top of you attacking. Don't believe that it works that way? Check this video. This is a whole lot worse then the priest exploiting the not being able to get knocked down bug.

As if this wasn't bad enough people are also finding new ways to exploit the alliance area's just like vanarch was exploited too. The legion guild last alliance on Mount Tyrannus lost exarch because of some kind of key running abuse not sure exactly what that was but here's something new that my guild has noticed. Someone from enlightened union will group up with a bunch of people from iron order alliance then go into dark quaver and go to each key node collect all five keys then drop them allowing the people from iron order to recover them and do this to every node on the map until all of the extractors are on cool down so no one can collect any until they all respawn again. This caused union hall to only get vault for 5 hours the last event. It also feeds the exarch and the other alliances a large amount of points for recovering keys this is why other people working as individuals stand no hope in securing any high positions in the alliance cause its impossible without exploiting to catch the top contributors.

The last thing which is also happening much more often is the macroing, botting in corsairs and fraywind. Having people sit in the save zone or at the beginning of the map in a corner jumping or using a skill to avoid getting marked as away from keyboard in order to get honor. We aren't just talking about one or two its gotten to the point when there's three or more in one battleground and its impossible to kick them cause they sit on a main character in the battleground participating and declining any vote kicks that get sent or they time out cause of two bots within one battleground. I hate to say it but to fix this problem En-Masse would need to make it so if a person doesn't get at least 1 kill or 1 assist a person receives no credit. Take away the incentive to away from keyboard in a battleground.

Who knows if En-Masse plans on fixing any of the bugs but it seems like the Tera Online community is just as bad or worse then the botting or Chinese gold farmer communities that people rage about. Most of your exploiters speak English and are in your top elitist guilds cause they feel like they need to abuse the game to win cause they aren't satisfied in just being good. If you've been exploiting any of these and reading this topic most likely I think you are scum. Just because your ruining the game for everyone else and i still enjoy Tera which is why I don't abuse it or try and ruin it for other people. But from now on when you experience any of the above report it blow up En-Masse support or the forums force them to do something about it. Cause I'm frankly tired of reporting stuff and getting generic responses all the time and having bugs that have existed for five months only get worse and worse.
Posted by TrueNoir at 1:29 PM 2 comments: Links to this post

If you have not seen the new class yet for Tera Online. Korea has decided to add a brand new class into Tera. This new class is an elin only race specific class. At first the thought of this class was supposed to be similar to a tank but after seeing some of the skills and descriptions this class seems more like a new dps class then a tank because of its light armor. This new class does have a unique skill the ability to counter attack. Something that no class in Tera Online has yet. One of my friend's and fuyuko's friend was kind enough to translate some of the website that Korea put up for this new dark elin class. Mysterious Dark Elin appeared
the long war against the argon left a scar of destruction over all of arborea's nature and life
the elin queen in sorrow declared war
pora elinu became a base supplying war supplies
on a silent day when i was ready to go to the alliance with war supplies,
pillar of fire appeared and screams were spreading,
The invader was a Orcan crowd, their madness made pora elinu turn into a hell quickly
Rida Elin queen saw the spirit tree and she sheltered herself in a place of exile with sadness and anger
on that day she was spending her days in sadness,
a mysterious elin and mercenary came to her.
she said she will bring back pora elinu.
"embracing moonlight night and darkness,
it is sharp critical double edged sword cutting even the sky." 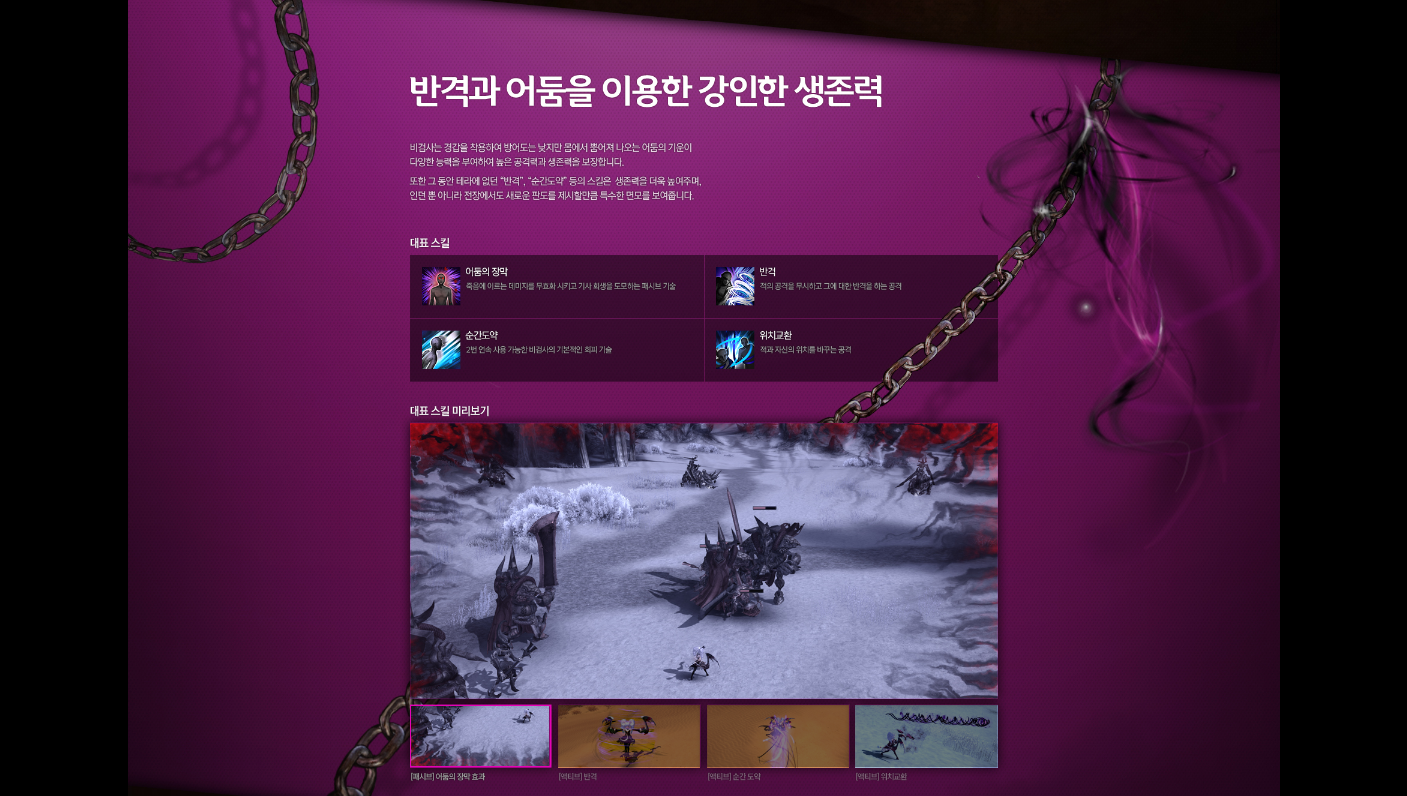 strong survivability using counter attack and darkness she uses light armor. This class has low defense but the darkness gives her various abilities and high damage for survivability.
Also Tera Online had no counter attack skills until now, sudden leap so it gives her more survivability. Very Special class skills.
characteristic skills:
Tent of Darkness = no damage when you are gonna die / counter = ignore enemy attack
Sudden Leap = you can dodge 2 times  /  exchange location = change your place to the enemy's place 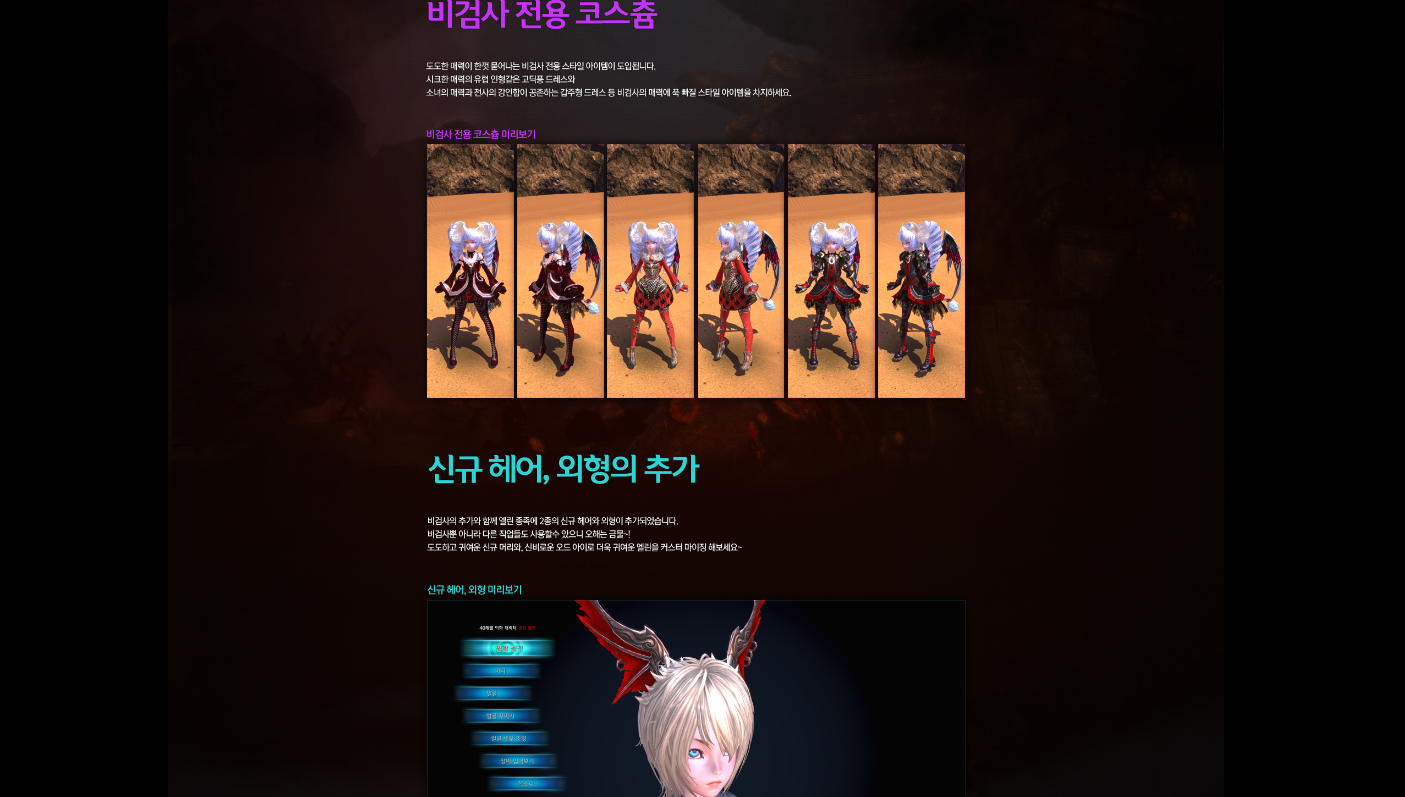 Dark Elin costumes / New hair and appearance
Condition for making this new class is as follows:
You will need a level 40 or above character on the account already. Once the new Dark Elin class is created she will start at level 50. When you make a Reaper it enters Tera Online with a key story quest and new general quests completed up to level 50. From level 50 to 58, Reaper be leveling in an exclusive area to experience the back story and grow. Reaper class gains experience quickly in this area as well as necessary gear and even cosmetic gear to catch up.
They will be provided a new set of gear called Princess Aphrodite gear which will make it easy for them to catch up to wonderhome hardmode gear. But the dungeons will not drop the gear for people they will be obtained by designs from the exclusive Reaper leveling grounds.

This new class is scheduled for release January 15th 2014.

So as we can see a lot of interesting updates. Another thing that my friend also brought to my attention was some new weapon skins. And amazingly one weapon skin that doesn't look ugly for mystic. This new weapon skin is called "Legacy of Angels".  Archangel Ancient Heritage comes from the random Angel Box.

The only question is how long until we get these updates for the English servers. We are supposed to get Kuma World next so we might end up having to wait for these new updates for quite awhile especially since the new Dark Elin class is still in the making. I will update this topic if more new information for these new updates come out. If you have yet to see the video for this check below:

Posted by TrueNoir at 10:53 PM 3 comments: Links to this post