Tera Online is an amazing game but part of the problem for a new player is trying to learn all of the crafting and enchanting and learning how to best utilize these features in game. So today I'm going to go over in detail each of the area's of crafting how to use them and then also how to get the most out of them later when you hit 60's.  To help us explain this today we have Sishen from Valley of Titan's helping us explain profession's today. 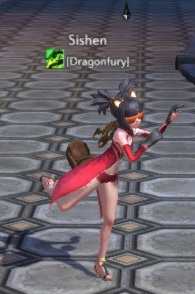 The very first type of enchanting you will run into as a new player is enchanting which allows you to add a 1+ to you gear and continue until you hit the max for an enchant-able weapon which is +9. Below you can see an example of a weapon which is enchant-able and it has been enchanted to +4. You will also pick up an enchanting quest at around level 26 that will help you learn how to enchant but some people skip though it and do not read what it says but this guide will explain it. 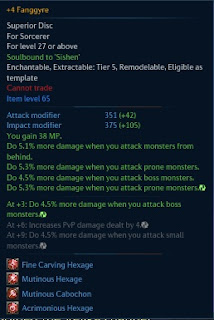 As you can see on the side in white text the weapon says Enchant-able meaning it can be enchanted. An enchant-able weapon usually either will say that or you will see stat's in gray that give bonuses when you enchant it to +3 and as you can see it also goes up to +9 max. Next to the attack modifier if you look you'll see a green +42 meaning that it's giving bonus's for being enchanted same goes for the impact modifier. The bonus's increase more with every +1 you add to a weapon making so you do more damage. Under the impact modifier you see other bonus's these are:

As you can see these bonus's are giving you extra damage buff's which are situational like doing more damage to a boss monster or when a monster is prone (knocked down). These extra stats can also be changed if you notice the ones which have a dot at the end of them in game it looks like a recycle sign but it might be too hard to see these are the stat's which can be reset or changed in the game.

Resetting the stats or changing them on a weapon is called sealing and unsealing. You can tell a weapon is sealed just by looking at it weapons over level 50 will always be pre-sealed and you will need to use an identifying scroll to uncover the stats below is an example of that process. 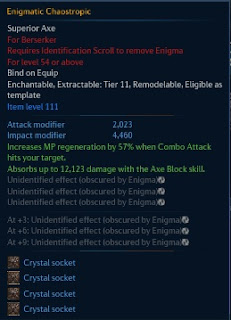 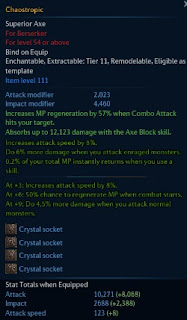 If you look above these are the items required in the unsealing process they can be bought from any of the normal merchants in game. this is the money bag icon on your mini map. If you look at the weapon to the left it says Enigmatic and the stats say they are unidentified this means the weapon is sealed and needs to be identified with the common identification scroll.

After you have used the scroll and the weapon is unsealed it removes the enigmatic name from the weapon and uncovers the stat's bonus's so you can see if you like them or you want to try an change them again. If the stats are not to your liking you can use the common enigmatic scroll to seal the weapon again which resets the stat's again. 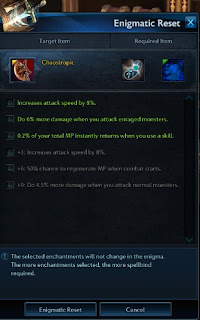 If you look to the left this is the window you get when you attempt to seal a weapon again. If you use an item called spellbind it allows you to lock the stat's that you want to keep and reset the ones you don't want. The process of locking some is an expensive one so this would not be a good idea for someone new to try usually if you use a few common scrolls and randomly reset all of the stats you'll get lucky and get something good enough to use. But at level 60 using spellbind is very useful so you can get the most out of you weapon. After you click Enigmatic Reset the weapon will go back to being sealed. 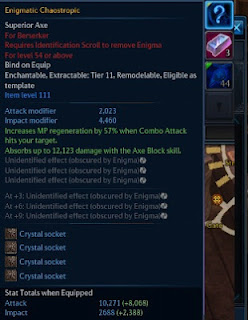 After its sealed it will have a ? in your inventory showing that its enigmatic and the stats are hidden. 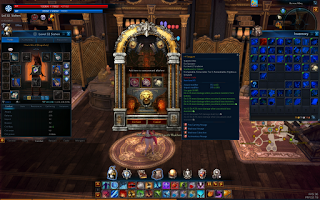 This above is the enchanting window first your weapon your enchanting goes in first then you put in Alkahest which is bought from merchants and then you need an item of the same tier and type the class of the item does not matter making it a very simple process to enchant. If you fail your item will not upgrade and the Alkahest and the other tier weapon are consumed in the process.

The process of dyeing equipment is a pretty simple one it requires you to go to the Dye NPC which can be found in Velika and buy dyes or you can make them though items which you find during crafting and buying kits to craft the dyes from the same dye NPC. 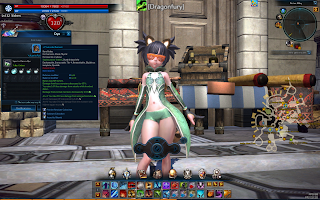 After you buy a color you want this one is the spectral green which has different shades of green you can pick one of the colors out of the window and apply it to your armor. It lasts 7 days so you will have to keep reapplying it every 7 days.

Remodeling has changed in recent times now you can use any item level 58 and under as a template to change the look of your armor because many of the armor's did not come with a template. You can still buy more templates from the vendor but the best looking armor usually comes from the crafted recipes. 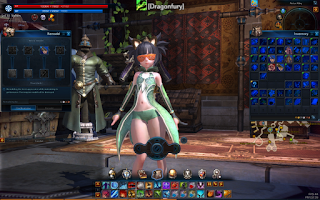 Above you can see the gloves are a black color and have holes cut out for the thumbs in the gloves so we will remodel using one of the items in our inventory by putting it into the box then applying it. 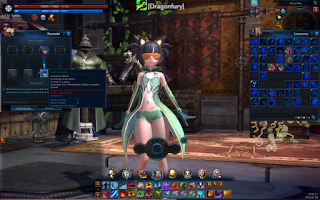 As you can see after dragging a new item into the box you can see now my gloves look solid dark green. After you click apply that armor will stay remodeled permanently unless you use another NPC to remove the remodel on it again.

Crystal's are one of the most important features in the game after you've mastered the enchanting aspect of the game. Crystal's are what keeps your damage really good and keeps you up during fights. The most important crystal's during the end of the game are the boss crystals like the reduction from boss damage and also the crystals which increase base damage or critical damage to bosses. Boss crystals can mean life or death and can keep you from the embarrassment of being the only one dieing during a dungeon group. The weapon crystals for damage can keep you hitting those 100k+ numbers against bosses since all monsters in the dungeon are usually boss monsters. Other crystals can come in handy for other situations such as farming gold you can use normal monster damage reduction and increase damage on normal monsters. And when you get to 58+ you have another element of crystals they can go into accessories too providing even more bonus's to your gear. Most of the green crystals come from reputation of different level 60 area's. For a full list of the crystal types you can refer to Tera Online: Guide to Weapon Upgrading for a list of crystal's that you can find in game. Another tip crystals can be removed from gear simply by clicking them out make sure you do not throw them away when you upgrade gear because they can be a valuable loss. Something else that is commonly forgotten with crystals is they can also break when you are killed by a boss crystal so it is always a good idea to carry some extra's if you happen to die in a dungeon so you can continue fighting without going back to town.

Luxing is a process which allows an item to go from +9 up to +12 which increases the main attributes of the weapon and causes the extra bonus's to give more of a bonus then normal. The process is similar to the using enigmatic scrolls on a weapon only the difference is you have to use master enigmatic scrolls which come from dungeon drops they have a 10 % chance to cause an item to Lux and unlock the +12 of a weapon. This requires a lot of patients it can be easy or it can be really hard if you are unlucky. My armor only took 5 scrolls but I know others who have wasted over 100 scrolls on a weapon. 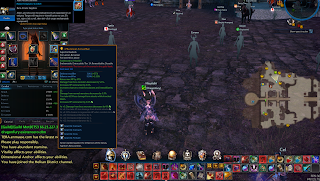 Above you can see a masterwork chest piece and I provided the master enigmatic scroll so you could see what it looks like in case you manage to get yourself some scrolls you'll know to save them. This process is very expensive and can only be used on items which say do not say they cannot be masterwork's so you will want to avoid doing this on lower level weapons unless you just have the money to burn on doing it.