So you've just logged into Tera Online and find yourself confused because you see all these random Icon's on your map and have no idea what they are for or what they do. If you can agree with this then I'm sure this guide will be just what your looking for. 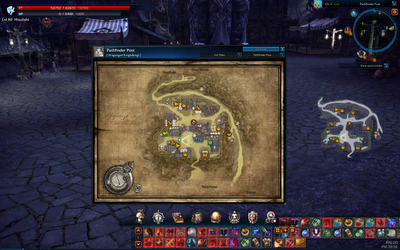 So if your looking at the screenshot above with me you'll notice I have the local map up for the location I'm in and you have all these different icon's up on it which might be confusing since you'll see these in every town pretty much. Next to the main map in the right corner you see the transparent smaller map version this is the mini map you'll be using constantly since it always floats over in that part of your game. If you do not see this map hit the N key to show it and it will then reappear it can also be hidden using the same key if you do not like knowing where your going.

If you look above I've provided each one of the icon's that you would most likely find normally and some information about them. But with this I will also explain some more information about each of these especially the vendors so that you'll be more educated in the future for your Tera Online playing.

So lets go over the merchant first this is going to be the first NPC you'll even be sent to in the island of dawn's town. Like most games merchants in Tera Online work like normal they sell items and will also allow you to sell your junk items to them as well. But they include many items which can be bought that hold many uses. For example merchants sell scrolls to towns not just the local town but they sell scrolls to the main towns as well of each area. Not only that but in major cities merchants will sell scrolls to all the smaller towns making moving from place to place very fast in many cases faster then a flight master can take you. Merchants also sell other items like band-aids for healing yourself, Buff pot's for battle, Alkahest for enchanting, Campfires for restoring stamina the slow way,
and enigmatic scrolls for the beginning of your modifying weapons to get a better quality or stronger weapon.

The trade broker has been called many things in different games but most people would know this to be the auction house. It allows you to sell items so other players who need the item can buy it from you. Tera Online's trade broker system is really nice because it will automatically adjust sell value depending on the prices which are already found on the trade broker making it easy for new players to sell items without needing a price guide. The trade broker comes packed with many different ways to view items by lowest prices or cheapest price per unit and quite a few other way's as well.

The banker is one of the most useful NPC's for a new player it allows you to store your items that you want to keep and you can also store your gold the bank is shared between all of your characters making it easy to put gold in for that new alt without having to mail it to yourself or allow you to pull out that item which you got for your alt. The banker also has the mailbox included within the same NPC as well as the guild banker if you happen to be in a guild.

The teleport master is another way of getting around a map quickly especially after you are killed by something or someone. For a small fee the teleport master will port you to the closest camp of a location of a map it makes it easy to move from a town destination into the outside world without having to walk all over the place. The one downside is the cost of teleporting can be controlled by the vanarch who control's the town so prices can vary depending on the tax of that location.

Need to learn new skills? The tactics or magic trainers can be found in smaller cities as well as main ones allowing you to buy new skills every time you hit a new level which has some to learn. Vanarch's can control the smaller cities tactic trainers disable them as well as tax them so prices can always vary outside of the main cities but you can always move to a main city to buy the cheaper non taxed skills.

The flightmaster is a NPC which is found in many mmorpg's besides Tera Online but the function is pretty much the same as most games get from one place to another more quickly. The time from flying from one place to another is much faster then games like WoW which seems to take forever since they are like real time flights. The flightmaster is another NPC which can be taxed outside of main cities so prices will vary.

Besides the normal guild system there are guild quests which help provide the guild and its members with special usable tokens used in either the buying of special potions like experience or damage increase potions or in the leveling and upkeep of the guild. You'll find them in every town and the NPC looks like a bulletin board you always turn them in at a NPC next to the board to get the rewards.

The specialty vendor is one of the very interesting NPC's in Tera Online whether its opened in the town your at or not is determined by the vanarch as well as the taxes for the NPC. This NPC can only be found outside of main cities think of it as a perk for winning vanarch. The NPC sells special versions of crystals for weapons and armor, scrolls to every dungeon in game, better quality bandages, higher quality alkahest for enchanting over +6 and special charms used in front of campfires to increase your damage and defenses. Prices will vary because it is controlled by vanarch's.

Reputation vendors sell different items depending on the vendor not every town will have a reputation for you to get but many of the level 60 area's and certain main cities also have reputation. Doing dailies is the best way to be able to unlock items which is purchasable from these vendors but some monsters can also be killed in the process to farm enough as well.

If you have ADHD like myself and find sitting near a fire and waiting for stamina to recharge to be a pain in the butt then the cleric will be your best friend. The cleric in town will restore stamina for a fee no more waiting for a fire to fill you up be lazy and just buy your stamina. Keep in mind prices vary depending on level but also depend on the taxes set for the area since it is also vanarch controlled. Clerics in recent times can also restore HP and mana as well making them even more useful.

Available Daily quests are pretty straight forward they provide you with a repeatable daily which can either be for reputation or just another quest for money that you can do these normally rotate to different quests keeping things fresh.

Quests which are completed are shown as the asterisk * in game the green one is for daily quests that are completed and ready to be turned in. A red one shows a story quest which is completed. And a yellow one is for a normal NPC quest.

A yellow exclamation is a quest  which you can pick up. Monsters also will show these above their name especially if you have the quest as you can see from this picture. 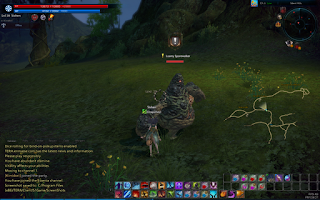 When a monster is killed it will clearly tell you whether you got credited for the quest in the center of your screen. 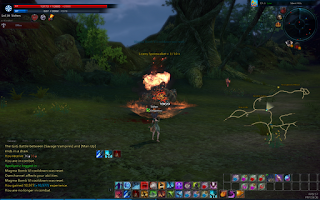 Quest that can be turned in will show in the world map making it so that if the quest turn in is in another location you can still find out what map you need to travel to so you can turn the quest in.


This concludes the Map interface in Tera Online hopefully this has been an eye opener and allowed you to learn a bit more about Tera Online while providing some valuable future information on some of the vendors you find in the later parts of the game. Stay tuned for more useful guides on Tera Online in the future!