Mmorpg's have tried for years to provide world raids in game and because of servers limitations as well as graphic cards not being able to handle it most have realized that it is not possible to have 900+ players on a single spot. But Tera Online has this issue with the world raid called Nexus. Players spend a Nexus raid lagging trying to clear portals so they can get their Agnitor reputation and gold.

To many players seeing how laggy Nexus is ends up being a major turn off. But there are some things you can do to increase your FPS and be able to at least stay connected for it which allows you to at least get into the raid Nexus Traverse which is the very first raid. And today I'll explain how to go about doing this so your Nexus this weekend will be a little better.

One of the first things you can do if your in the massive group of players you can either turn away and face outside of the group this will reduce your lag because you won't be looking into the mass of players an effects. I usually bring badges and sit on the edge of the nexus portal because I lag too much to move and its hard to fill the raid group while staying alive otherwise. If your trying to be in the center of the raid you can zoom into your character which will reduce lag some as well and improve FPS. But one of the issue's with being in the center of the pile is if the boss decides to sit on your face you can get one shot and then it makes it hard for your team to bring you back up till after the portal is dead. Another way is by turning off combat logs which you can see how to do that below by hitting ALT and clicking the combat chat tag then clicking the gear in the left corner and editing the chat options for that window and un-checking all the combat logs. 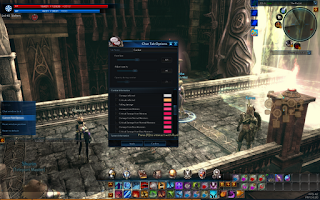 Something else that can be done to help increase your FPS is also turning off the titles and hp bars of players around you. To do this you would go to the game options I've provided a screenshot of the settings so you can see which I turned off. You can also turn off NPC's as well temporarily if you want but that's up to you. 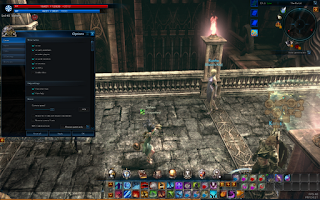 The last way you can improve frame rate is decreasing the effects as well as the distance. Effects cannot be turned completely off unfortunately and I have suggested that to the developers but not sure if they will in the future give a way to remove all effects. The distance improves how far you see ahead of you this can be useful in PvP like battleground's so that you have less lag if your video isn't that good but it can improve frame rate during Nexus as well. 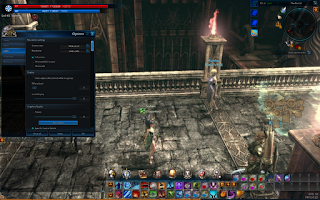 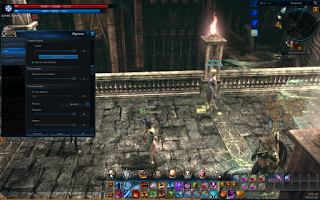 That's about all you can do other then having a good amount of ram and a decent computer with video card. Hopefully we will see more improvements made after the server merge coming up and hopefully they will improve server quality and take more measures to make Nexus function better but for now these steps above will improve your experience. Otherwise have a great weekend in Tera Online and I hope you get awesome loot!
Posted by Unknown at 7:45 PM