Joining a mmorpg like Tera Online usually comes with a lot of rewards if you have bought the game then you can expect that you got your founders account and if you used your code backwards chances are you got a free mount with some free emeralds which vendor for 1k gold each. But many people never bought the physical copy and the time to still obtain these is running out. So how will you make gold in Tera Online? Most websites want to sell you some secret gold farming guide or sell you gold with some shady gold farming outfit but today I will teach you how to make gold in Tera Online completely free and no strings attatched.

At lower levels while it might seem nearly impossible to farm gold there are still some ways to farm gold without having a level 60. You will need to however get to level 27 or higher first to make it worth time to farm. The very first dungeon which drops superior items is called Sinestral Manor these are valuable to lower levels and people making new characters because when upgraded they can carry a player quickly through level 27-38 without having to buy a new weapon or armor. Armors usually sell for much more then the weapons since they can be used by multible classes. Example a priest uses the same type of armor as a sorcerer or mystic just like archers share the same gear with warriors and slayers. Even if no superior armors are for sale chances are you can sell armors for 2 or 3 times the value since drop of armors are also quite rare. 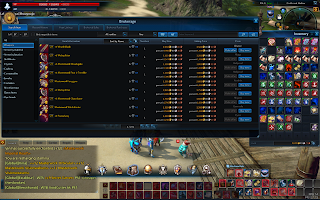 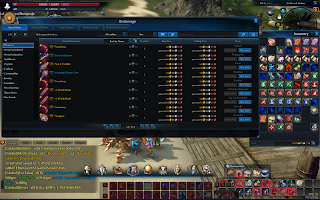 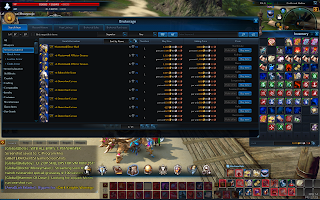 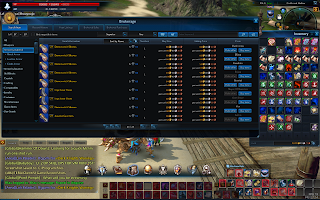 As you can see above these are some of the current prices keep in mind its double drop weekend right now prices vary depending on supply and demand and the more the market gets flooded of a certain item. The more of a demand the item will be but the difference between weapons and armor is a lot armor will always be higher since its a harder drop and has more demand. If you notice some people upgrade the item to +6 this is because upgrading to +6 is very cheap and many people are lazy or cheap and won't do this themselves so if someone upgrades the item for them they usually will spend more money on it. Some people also twink characters and look for masterworked version of an item if you get lucky and masterwork an item chances are it will sell for much more. Twinking is a term which describes someone getting the highest quality gear for a certain bracket so they can kill others while there is no battlegrounds for lower levels people will still do this in open world. But only on the PvP servers so prices might not be as high on PvE servers.

Keep in mind that every dungeon from 27 onward becomes a place to make money if you want to solo the dungeon you usually need to out level the dungeon by 5 to 8 levels to solo it you must have the gear from the next dungeon to do it. Characters which are higher then the level of the dungeon suffer a drop reduction which is usually about half unless they run with a lower level to balance it out but even still you will have decent items drop it just doesnt make too much sense for a level 60 to farm level 27 dungeons since they can just do level 60 dungeons and make more money in less time.

Some levels also have special weapons of higher tiers then normal like for example akasha's hidout weapon have a 107 item level, 109 and 111 item level. The 111 item level items compare to the low tier level 58 weapons making them very useful for leveling. If you +9 one of those weapons you can use it till you hit 58 making it a very quick and easy way to level up since they have such high base damage. People usually will spend 500 to 1k+ for these weapons and because many people do not know this about them they usually list them at low prices especially new people. Usually you can buy them and resell them for much more at a very fast rate and for a new player this can be a great source of income for you especially when your under level 50. While writting this I managed to pick up lugibar's reach which is the very rare bow. In the dungeon you have a rare chance to get one of two monsters one of them drops all of the cloth gear the other drops all the leather and it seems that the leather is much more rare outcome and drop. This makes all of the leather based gear usually worth way over 1k if you are lucky and obtain any of those you will make money and fast. The leather armors are just as expensive. You can see below for an example of prices in the PvP server Mount Tyrannus. 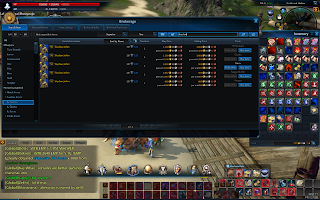 Lets talk about the more simple ways of making money without looking at gear. Some other items which are valuable which have pretty stable high demand markets are that of Arunic Panacea which is an item which will fully recover stamina to 120 without having to sit near a fire. Stamina effects attack damage and HP pool so during a hard boss fight like the queen you might find yourself dead a lot. Usually when ressurected you would have to use one of these to recover stamina since you would not have 10 minutes to stand near a fire. In my server these are going for 30g each and can be farmed very easily by doing low level dungeons or killing BAM monsters in any map. Many BAM monsters also drop crystals for weapons and armor and many of these will sell for a good amount of money especially ones like Hunter or Mutinous which are helpful for people leveling up some of the low level crystals of these types range from 10 to 190 gold each. You can always check market prices before killing a certain level of BAM so you know what to expect from the item drops.

The new elite status if you decide to buy it can also help you within your quest to obtain money. There are monthly strongbox keys which can either be sold to other players or used to open strongbox's in game which have random items. You can obtain many of the cash shop items out of them which sell for a decent amount of money. But usually the key's themselves sell for 180-200 gold each depending on market and demand. With elite status you get daily quest gold boost, gold hunting boost, experience boost, and reputation boost. While quests at lower levels don't give as much gold the boost is still a double the value and as you hit 40+ the quests start giving more then 5 gold each which will still reward you when you turn in quests. The gold hunting boost doubles gold picked up so if monsters are dropping 2 gold per kill you will obtain 4 gold instead. This add's up quickly normally you can expect if you do not spend any money on gear till you hit 60 with quests alone you should have 10k gold without the gold buff but with it should be closer to 20k gold this means every new character you level to 60 will end up with near to that much if you don't waste money on buying gear and farm everything yourself.

Daily quests are a great way at level 60 to pick up even more money most of these give 40-50 gold each along with reputation and reputation credits. The credits can be used at the reputation vendor to buy gear, cosmetics and crystals many of which will also sell on the auction house for very generous amounts cause many people don't want to farm the reputation and credits for them. With elite status you can complete 20 daily quests without it you can only do 10 of them. Even at only 10 dailies that is 1k gold per character if you feel like doing it on each just from the quest gold. This doesn't include the credits you obtain from them. 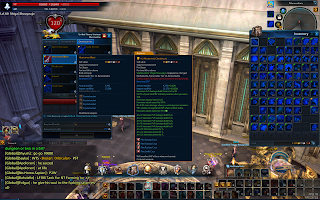 If you don't have time for BAM farming or dungeon running of any kind because of work you could always look into using the cash shop to make money even though this game is free to play many of the cosmetic mounts and items are popular and high demand. This makes it possible for people who do not have money to buy them want to buy them from the trade broker for gold. You can buy mounts and cosmetic gear then sell them or you can just stick to the strongbox keys and sell them or open items with them to sell the items. The choice is up to you.

BAM farming at level 60 and dungeon farming are the most rewarding if you can solo bams you get to keep all the loot for yourself the same with dungeons. Many people can solo the level 58 dungeons and make money selling master enigmatic scrolls for gold. Others farm bams for the tier 13's and 14s they drop as well as a chance for the rare vitrol or a semi engimatic scroll. But dungeon farming has the highest yield money wise especially if you can clear the queen hardmode since many peices sell for 50k to 100k gold.

Making gold in Tera Online is not very hard you just need to figure out which items are in demand the most obtain them and control the market for them. Hopefully with the information I have provided you will find it much easier to make gold. Feel free to share this guide and any others with your friends I make these for everyone.