For people that can't see the font or maybe just don't like the default font there's a way that you can change it. The only bad thing about it is so far it seems to be slightly limited to only a few different font styles. But even though it is limited there's a few very nice and easy to read font types. 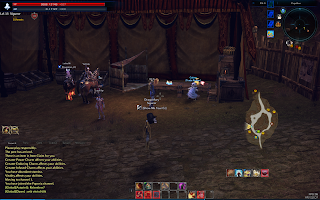 And open the file called: GFxUI.usa   Using notepad the default one looks like so:


By changing the ChatFont line you can modify the in game chat but it seems limited to only the few styles provided other styles which don't work will appear as [] squares in game. I did some experimenting trying different standard types of fonts but none of them seemed to work other then the ones provided so the working fonts for the English package are:

You can change the  FontLib and use the korean fonts from some of the other countries like from the INT folder but the above fonts can be swapped into the ChatFont= without having to change the FontLib in the config if you want to use other font types you need to change the name of the package they are located from.

If anyone figures out more English fonts which work or if they find a way to pack and repack more font types into the fonts_eng.fonts_eng would be great if you could comment on how to do it. I extracted the fonts_eng.gpk but it doesn't seem to be standard font types. Out of the files that are packed in it is one called fonts_eng.GFxMovieInfo which seems to be a flash related file what could be possible is replacing it with one from a different game to add new types of fonts. A friend told me the game Alice Madness Returns uses similar font type files but I don't know enough to figure out if it's possible to modify the font. At least what we have figured out is enough to allow us to customize the font style and enjoy a Tera that's easier on the eye's.