So nexus has changed yet again this time with more noticeable changes this time to include a remodeled nexus. Now instead of the massive world raid with over 900 people in a single location everyone has to pick up a quest and there's a limit of 120 quests in each nexus portal. The times for nexus have also been changed as well.

Nexus Times:
So far the biggest downside to this is that if you don't show up to nexus on time you will not be going to do nexus anymore because portals fill up very fast your lucky if you get in and get the quest. While the server is less laggy and the portals run much smoother then they used too it still hasn't prevented the game from crashing but part of this problem has to do with people DDOS attacking the server. Portal farming is nearly impossible now because of the massive amount of players which show up trying to actually get quests. The credits from the portals have been increased and so has the reward from the quest. Now you get enough credits that with the elite status you should have enough to buy one piece of agnitor gear per nexus.

Portals start with the normal gray inactive color with a 0/120 from the start when people start filling it the color changes to blue when the portal is getting slightly full it turns orange meaning there's a good amount of people inside. When the portal turns red it means there's very few portals left once the portal has no quests left it gets a locked mark on it to show that no one can pick up the quest anymore. People can go to a locked portal but they get no rewards for being inside of that portal making it very pointless to be inside of it. You only need to clean one phase 3 portal and you must be alive to get credit. If you die during a phase you will lose the quest and someone can take your place.

Gvg's can still take place during nexus and because once you die you don't get credit this can be a very annoying thing for you and your guild. You will not want to declare during nexus if you plan to go or you'll want to surrender to avoid getting pushed out of nexus. 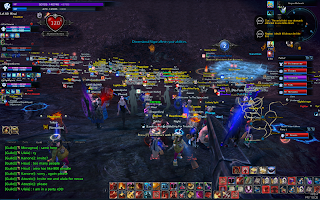 The quest rewards per stage of nexus has also been changed to the following:


The raid leader cannot click the quest for everyone. Everyone must be responsible for picking up his own quest. The poison that was found in nexus no longer decreases HP over time so the only thing that can hurt is the damage that the bosses can do. The HP for the bosses was greatly reduced making the phases go by very fast. Over all the portals are cleared 10 to 15 minutes into nexus which is a huge change compared to the painful hour we used to spend.

The quest reward for the dragon inside of the nexus traverse has also been modified as follows:

The gold however does not get doubled with the gold buff so you will not receive more then 200 per nexus from this but if your lucky you might be able to clear two portals in nexus for extra credits.  The nexus boons no longer drop from the bosses inside of the portals but nexus traverse monsters still drop nexus boons.

Over all you should have much less problems with lag during clearing nexus portals the over all nexus experience is easier. But I do recommend that you show up on time if you plan to do nexus. Even 5 minutes late can cause you to not get the quest and miss your nexus.