Most people that have been playing Tera Online for a longer period of time might already have all of their secret tips of how to make gold in Tera Online and it might not be something they share with others. But because I work on this blog for all the Tera fans that enjoy the information I provide I'm willing to share some more ways to make money outside of questing and such. What I'll be explaining this time around is about market manipulation.

What I mean by market manipulation is controlling market prices on a certain item. If you have played World of Warcraft you might remember the addon called Auctioneer which was used to record and calculate prices of items and give you an idea whether an item was cheap or listed too low. In Tera the only thing you can use to get history of items is the Recent History button found in the auction window. 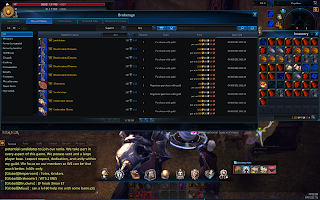 Even though we don't have a addon which calculates prices we can still control a market in all honesty manipulating a market which doesn't have an auctioneer style addon only increases the chance that you will make money. The reason being because other people who don't actually read any guide will never know. I'm sure most of you might be like well your posting this article and everyone's going to know now. The actual percentage of people to actually read the whole thing will be low and some that do might be like it's too much work, or I'm too lazy which is why they are usually the ones trying to borrow money from everyone in game and always complaining about being broke.

The best way to approach market manipulation is think about the item you plan on covering how popular it is, the amount of items listed on the market, and the price are some of the most important things to consider. If you yourself don't have a lot of money to work on this you'll want to pick an item that you can easily buy or obtain. The key to manipulating is finding that item which people buy often once you have a target what you'll want to do is buy out all of the other lists of that item which you might think is stupid at first but I'll explain. For example Carving Crux's are very useful in game and because a lot of people usually break crystals a lot they usually need to replace them and will buy them out of the auction house rather then waste time farming multiple BAM's. Since many junk crystals often drop and grinding dungeons for the crystal doesn't mean you will win it in a group unless you can solo it.

The reason you would buy all the current ones is lets say for example right now Carving Crux was 10 gold and their was 200 of them listed from different people at that cheap price. What you would be doing is buying all 200 for 10 gold each which would cost 2,000 gold then what you would do is re list them and sell them for 50 gold each since you know people really need them usually listing them individually for each crystal sold you would make 40 gold profit from them. If more people came in and tried to undercut you would continue to use the profit to buy up all the cheap crystals which gives you more supplies and control's the price of the item and eventually all of the crystals you have would sell out or you would just keep getting resupplied by people stupid enough to undercut you.

Keep in mind the Carving Crux is just an example but if you look at crystals at your server I'm sure you'll see other people doing the same thing. Keep in mind that it works with many types of items if you want a personal example that I'll share is during the Halloween event last year Tera gave out many interesting cosmetics and masks and while they where completely worthless at the time you could buy them for less then 1 gold each and the more rare ones which where RNG based items ranged from 1,000 gold to 3,000 gold at that point I still bought a lot of them. Now the number of these masks are pretty rare the ones which ranged for 1,000 to 3,000 are selling for 20,000 to 40,000 each while I did have to sacrifice some bank space and character space I made really good money selling the more rare ones. And the ones that where only 1 gold each are now closer to 1,000 to 2,000 gold each and I've sold a lot of them so far with more that I'm holding onto.

Keep in mind when you manipulate the market's like this you might think that the money spent buying items is wasted but a product received is still gold you just need to sell it to turn it back into gold again. And for every item that sells double or triple the price of what you bought it for you will end up with more gold then you started with.

All of the cosmetics that are an RNG whether you get them or not these usually end up being very expensive. Items which are high demand that break or are used up even ones like potions which some are used for fights like MCHM and someone who is doing the queen fight and runs out is forced to open a mobile trade broker and just pay whatever price is in the trade broker and needs the item now they will buy it. Even gear for leveling many people leveling alt's will buy items just so they don't have to farm even I do that at times.

One very important thing to remember is that the number of items you list will effect whether you can sell them or not. The reason for this is by listing large numbers of items at a increased price people will notice that you have a large amount of items and think you are just being over priced. If you list smaller amounts like 5 to 10 items at most at a time and wait for them to sell people will buy them without second guessing the price you are charging and the items will sell out much quicker giving less time for people to start under cutting your prices.

If you saw the last event with the extensive alkahest and people winning 1,000 of them every few seconds other people kept saying the prices would have to go down but the extensive prices never decreased under 30 gold each because anyone that saw them for that price bought them out instantly knowing that they could wait for prices to go back up and make money. The current price in my server is 88 gold each if you bought it when it was selling low you would have more then doubled your money.

Of course buying that much alkahest requires a lot of money to take advantage so that's why I said it's important to manipulate an item which isn't too expensive when you are first starting. After you've made enough profit with a cheap item you can move up to something more expensive that you can make higher profits per item.

Lastly remember most of Tera's systems like the enchanting or upgrading is RNG some people have terrible RNG luck if you use the cheap way to masterwork items you can sell the items for a really good profit since some people have terrible luck at masterworking or upgrading and will pay more money for a masterworked item or a fully enchanted item. If you use this guide properly you'll be able to enjoy Tera more and will stop being that person who asking the rest of us for gold everyday.
Posted by Unknown at 11:59 PM